The Athens Marathon will take place on November 13, 2022.
Please visit our home page for complete details.

The Athens Marathon is like no other on Earth. According to legend, it covers the same ground that the Athenian messenger Phiedippides ran when he brought news of victory from the battlefield of Marathon 2,500 years ago. When you run the Athens Marathon, you run in the very footsteps of the ancient gods and heros that gave birth to western civilization. The finish line is in Athens’ magnificent Olympic Stadium, the birthplace of the modern Olympic Games. Those who run the Athens Marathon say it is an experience they’ll never forget.

The Athens Marathon is recognized as the original marathon course and it was the same course used in the 2004 Olympics held in Athens. 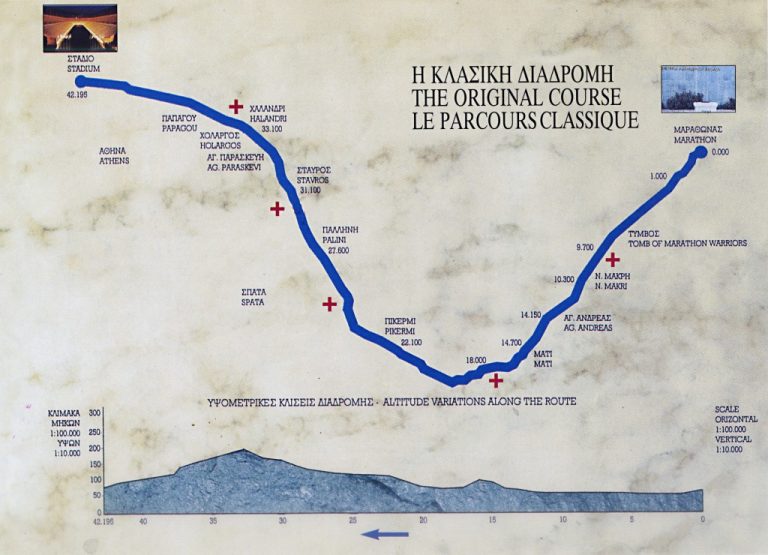 DATE:
November 13th, 2022
STARTING TIME:
9:00 AM at the ancient battlefield in the town of Marathon. Apostolos Greek Tours delivers you to the starting line in a comfortable chartered bus, so that you can start the day preparing yourself to run your best.
OTHER:
You must be at least 18 years old to enter the Athens Marathon. There is no qualifying time. The course is open for 8 hours. For the 10k and 5k you must be at least 12 years old with parental authorization.

New Changes for the 10km that is part of the Athens Marathon Program.

The 10km Road Race will, from now on, be held on Saturday late afternoon (meaning the day before the Marathon Race on November 12th 2022). The actual start time will be announced at a later date.

All event’s races will finish in the historic Panathenaic Stadium

In order for someone to participate in the 10km Road Race, he/she should be at least 12 years old with parental authorization.

Apart from the 10km, a 5km Road Race will also take place during the Athens Classic Marathon event. The starting point will be in front of the Panathinaikon Stadium (Propylea) and the course will run the historical center of the city of Athens, passing along significant monuments and city buildings. The 5km Road Race will finish in the Panathinaikon Stadium.
The runners need to be at the start area at least one-half  (1/2) hour before the start of the race. In order for someone to participate in the 5km Road Race, he/she should be at least 12 years old with parental authorization.

Examples of Items that are provided by the Race Organizers

Some items may change. Some items are not be included with the 5K

Receive an information packet about the Athens Marathon and the Tour

When you book with an account, you will be able to track your payment status, track the confirmation and you can also rate the tour after you finished the tour.
Sign Up

Or Continue As Guest